Subgrid views in the Unified Interface

A really nice feature in the Unified Interface is the control you have over which views to show for an entity. For example, let’s say you have the following views for Contacts:

But let’s say the ‘Influencers’ view was one you only wanted to use on a subgrid of Contacts showing on an Account form, i.e. you didn’t want it to show as a view on the sitemap.

Can this be done?

Well, it depends on what views you want to show on your subgrid. Let me explain.

And in the subgrid in the view designer you leave ‘Allow users to change view’ unticked: This excludes the view from the list of views in the App: 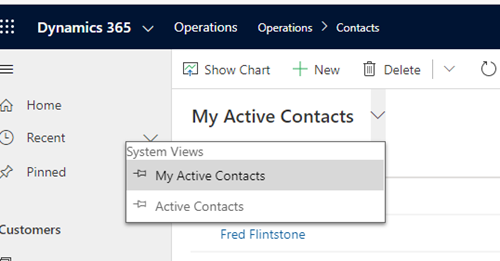 But it shows the view on the subgrid (please note, it doesn’t show the view name)

As you can see below, Fred and John are the only 2 contacts in this Account with the Influencer role, thereby proving that the screenshot above is using the ‘Influencers’ view:

So all is good with the option of only showing the default view.

So what about showing a selection of views?

If you want to show the ‘Influencers’ view and the ‘Active Contacts’ views on the subgrid, tick the ‘Allows users to change view’ box in the view designer, which brings up a list of views for you to select: 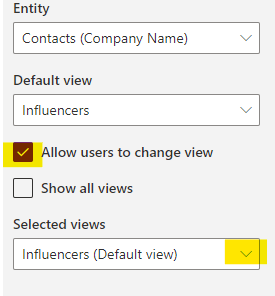 Now on the subgrid, you have both selected views showing: So all is good with this option too.

But what if you want to show all views on the subgrid?

In the form designer, select the ‘Show all views’ box. This time, in the view selector on the subgrid, you get all the views in the app, plus the associated views, but since the ‘Influencers’ view isn’t in the app, it doesn’t show, even though it is specified as the default view: This isn’t the user experience we want.

So, how do we get the ‘Influencers’ view to show as a selectable view on the subgrid, without including it in the list of views in the app?

There is a workaround, albeit an imperfect one.

In the view designer, select the ‘Allow users to change view’ box, but this time pick all 3 views, i.e. ‘Active Contacts’, ‘My Active Contacts’ and ‘Influencers’:

This time, all 3 views show on the subgrid, but notably, the other associated views, i.e. ‘Contact Associated View’ and ‘Entitlement Contacts’ don’t show: So, using these options you are controlling what views your users see on the sitemap, whilst also limiting what they can see on any specific subgrid, albeit with some limitations.

Check our Case Studies for examples of how we've helped various companies realise the benefits of Customer Engagement...

OA Systems did a brilliant job of updating our Microsoft CRM4.0 to Dynamics 365. The process was smooth from start to finish and they completed on time and on budget.
Highly recommended.

We are always looking for people who are excellent and passionate at what they do to join our team. If this sounds like you then we'd love to hear from you!

We use cookies and similar technologies to recognise your repeat visits and preferences, as well as to measure the effectiveness of campaigns and analyse traffic.